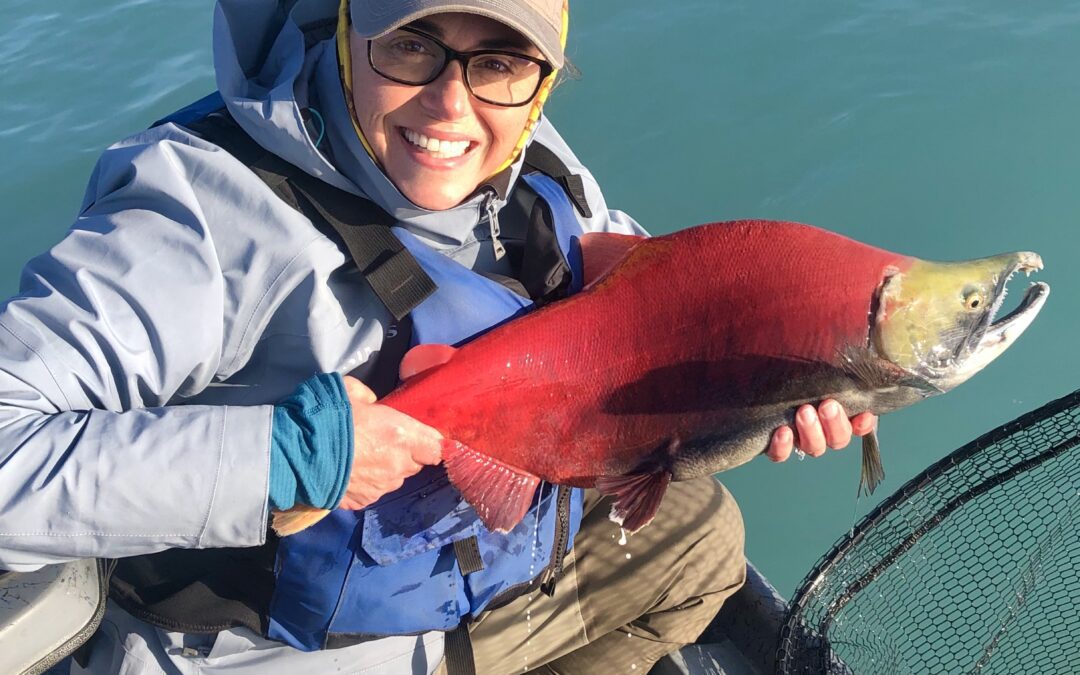 It’s that time of the year, when people (both locals and tourist alike), start thinking about the upcoming salmon season. And the salmon most folks pursue, are red/sockeye salmon. Not only because they return to the streams and rivers in such prolific numbers, but also because they’re considered one of the tastiest salmon on the planet! The first run of sockeye’s hit the peninsula rivers in fishable numbers by early June. The June run is much smaller in numbers and fish size compared to the second run in July. The Kenai River has one of the largest sockeye runs in the world (we’re talking in the millions), with fish averaging 7 to 12 pounds!

The gear used to catch red salmon, include baitcaster/spinning and flyrods! The technique used to catch these delicious eating fish is called flossing (where you cast your fly upstream, and let the current take your leader and fly downstream at the river current speed, pulling the fly through the salmons opening and closing mouth downstream). Once hooked, let the drag on your reel do the work. These fish are all wild and some of the hardest fighting fish you will ever encounter. Another river where I like to fish sockeye is on the Kasilof River (which is about twenty miles South of the Kenai River).

Planning for the Salmon Fishing Season

Although shore accessibility isn’t quite as good as the Kenai (you will need a boat to get to the good holes), it does offer a more relaxed environment in which to pursue sockeyes! Rarely any shoulder to shoulder crowding there. If you are planning a trip down to the Kenai Peninsula during sockeye season, remember the population almost doubles there during the sockeye frenzy! Meaning, limited availability for lodging, car rentals, goods in the grocery stores (especially freezer bags), and heavy traffic. All of that can be minimized with some pre-planning. Here are some reminders:

So, this summer, get out there and catch some of those chrome bodied, red fleshed beauties! And most of all, be safe on the drive down, don’t be in a hurry (pull over to take in the beautiful scenery – take some pictures, create some memories, live in the moment). And remember, going fishing isn’t always just about catching fish!