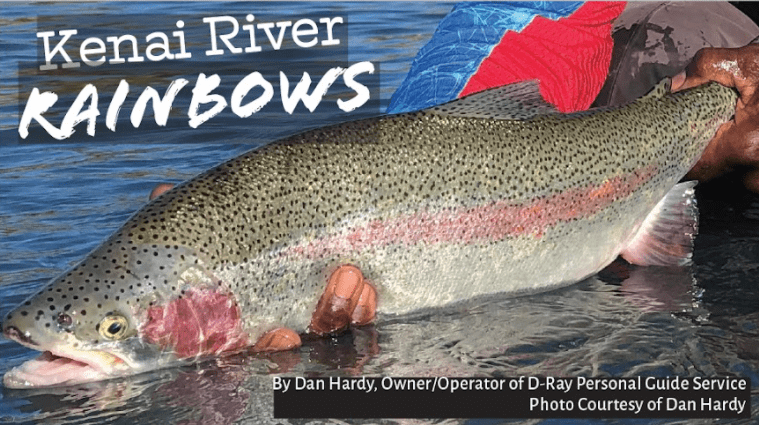 As the green leaves of summer begin to turn to the glowing reds and yellows of fall, it’s always a reminder for me that my favorite time of year to fish for rainbows is autumn.

Waking up to cooler temperatures and frost-covered windows will be the norm for the next several months. While I don’t look forward to it, what I am looking forward to is fishing for the huge rainbows and Dolly Varden that have started to feed voraciously in the cooler temperatures, trying to store up energy for the long winter months ahead.

On even-numbered years, there will be a ton of bio-mass in which to feed (think pink salmon), plus red and king salmon spawn. The autumn trout tend to be huge, not only because they’ve had all summer to feed, but also because genetically they are naturally bigger. Seven of the top ten largest rainbows caught in the state of Alaska have come from the Kenai River. I was down there fishing in September, and I hooked and fought a rainbow that I estimated to be well over 30 inches. I had my lunch handed to me, but it was exciting while it lasted.

When on the river, certain things are a constant reminder that fall has arrived. There is the overpowering stench of rotting fish carcasses, which, by the way, are perfume to trophy trout hunters. Water flows at a quarter of what it did in the summer, which makes wading somewhat safer and more enjoyable. And there is a quiet and stillness. Fishing the lower flows of the Kenai River is comparable to fishing the smaller streams up North in the Mat-Su Valley.

Spey fishing/swinging is really popular during October and into November, precisely because of the lower water flows. There aren’t many things more exciting than getting a tug from a monster rainbow on a fly that you’ve tied. The battles can be epic and not soon forgotten.

So, that’s it for now. Stay safe out there, handle the fish with care, and like I always say: